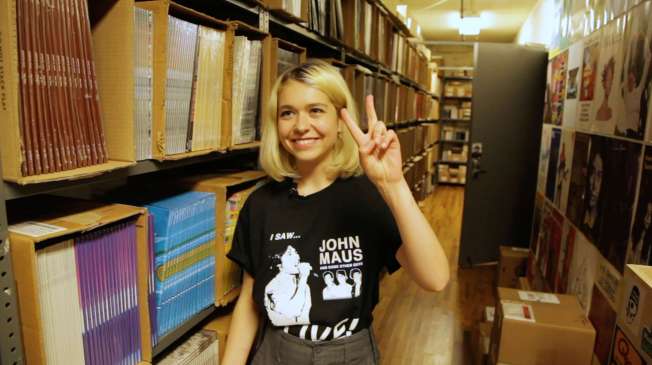 Contemporary slacker, according to The Guardian. My territory then. Myself and my three children have been mainlining the first two series of Sabrina, The Teenage Witch (the tv series that helped define contemporary slacker back in the 1990s) the last few months. My understanding of understated bittersweet ‘gentle’ (not the right word) grungy pop begins with Juliana Hatfield and yes, Miley Cyrus. (Miley, more than Taylor surely?) Soccer Mommy has a better name, but whatever. I am familiar with the genre, the concept. I’ve covered Liz Phair’s ‘Flower’ on stage with awkward angular Brisbane iconoclasts Bent. I got banned from the Crocodile Cafe in Seattle after a Hatfield gig. A few years earlier, I engaged in a Manhattan street spat with Matador Records founder Gerard Cosloy (who know who was chasing who?). Handbags at dawn. Matador, being the home of Snail Mail. Bittersweet with the emphasis on… nah. Let’s not go down that path. Everything is perfect in our imperfect world. Heaven, heaven is a place where nothing ever happens. Something to do with a distrust of the outside world. This music resonates the way this music has always resonated in my world. Makes me think of late night/early morning Sydney taverns. No jagged edges beyond the “pained vulnerability” of the lyrics but that’s the way this music rolls.

One thought on “How NOT to write about music – 20. Snail Mail”