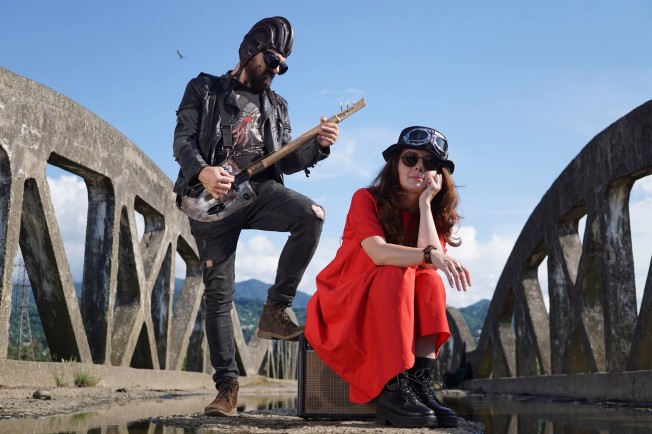 I know full well that NO ONE is going to click onto this blog entry – if it ain’t Bruce Springsteen or Joy Division, it ain’t worth a damn – so I thought I would take the opportunity to reprint a thoroughly under-researched article I wrote a few months ago for a French print fanzine.

Oh, wait. First, the music. I do not deny I do not know even the first thing about Asea Sool, even who recommended the band to me. I just know what I love, and I fucking love  this. “British rock’n’roll, US delta blues, French chansons and Georgian folk,” they reckon – and that sounds about right. This music has got this otherness that is so hard to fake (very nice scream, too) – sure, I can hear elements of British and American rock and pop music in this duo’s other songs, but to me that is the least interesting aspect of their sometimes unhinged, often contrary sound. And that is why this next song is my favourite. That, and its untrammeled infectious energy…

Five songs sung in French that I like, by Everett True

I do not claim these songs to be the greatest.

I do not claim these songs to be representative of my favourite songs sung in French (surely, I would bring in more music from the 1950s and 1960s for that?).

I do not claim these songs to be representative of my taste, in general.

I do not think these songs fill a void.

These songs are simply representative of a desire to turn around some written copy for a friend and knowing that I could never properly research a request like “name my favourite five songs sung in French” (the field is too vast, and my knowledge too limited) I figured it might be better to play to the galleries once more and name a handful of songs that are no so well-known. Except, perhaps they are in this context? Who knows.

Short aside here, but did Nina Simone ever sing anything in French? I know she did. I’d have Karaocake in this list except she sings in English. And I’d have Ruth in here except this list has been limited to a ridiculously short number. Can we include Pascal Comelade’s ukulele-and-balloon instrumental version of ‘I Can’t Control Myself’? Not sung in French but not sung in English either. At the very least, please can we mention his early band, the Young Marble Giants-influenced Fall Of Saigon?
Please?

The purest encapsulation of everything I LOVE about pop music RIGHT HERE. God, I want to see all these artists and performers play live SO MUCH.

Here is some Asea Sool again. I was going to throw in a compendium of comments left on my ‘Ed Sheeran Is Shit’ YouTube video but then realised no one would see them.

And here. Have a little bonus Crayola Lectern as well.

This post has something for everyone, except Bruce Springsteen fans. It’s a right fucking shame no one is going to click on it.

One thought on “How NOT to write about music – 85. Asea Sool”