…wherein Kanye continues with his persecution complex, this time comparing what has happened to him with what happened to Jesus…

Again, the comments underneath the music tell you more about the music then the music itself (and this is one of the best moments from Jesus is King) (and let’s not overlook the inclusion of Kenny G here, but embrace it and admit that, as ever, the song would have been far better without the inclusion of Kenny G here) (and let us state here and now that while gospel music and Jesus can often lift previously unfocused artists to new heights of passion, Kanye does not sound inspired, does not sound impassioned on most of Jesus is King) (and this remains one of the greatest songs here, mainly for the urgency and repetition in the choral segments here, interspersed with some very nice percussive effects that sound like a door, or coffin, slamming shut) (and let us point out that much of this feels like an unhinged marketing gimmick the way much of Kanye’s work feels like unhinged marketing gimmicks even as you believe he believes he thinks it real) (but usually this does not matter, indeed often this leads to flashes of brilliance, genius) (and let us state those flashes are so far and few between here as to be non-existent) (and let us state that… you’re not reading this now, are you?).

As Kanye has it: it’s a hard road to heaven – but shit, he got a head start now, don’t he?

Let me state here and now, my personal bias.

There are plenty of people who disagree with me, though. Remember folk, it’s a big and scary world out there. Man.

Some hold that this is “fake Christianity at its finest” but that leads to the rather obvious question… what the fuck is ‘real’ Christianity?

God moves in mysterious ways, and sometimes she’s quite dull as well.

It still shits all over Bob Dylan though.

Jesus is King: the merch stall

You’d have thought they could’ve found a clean pair. 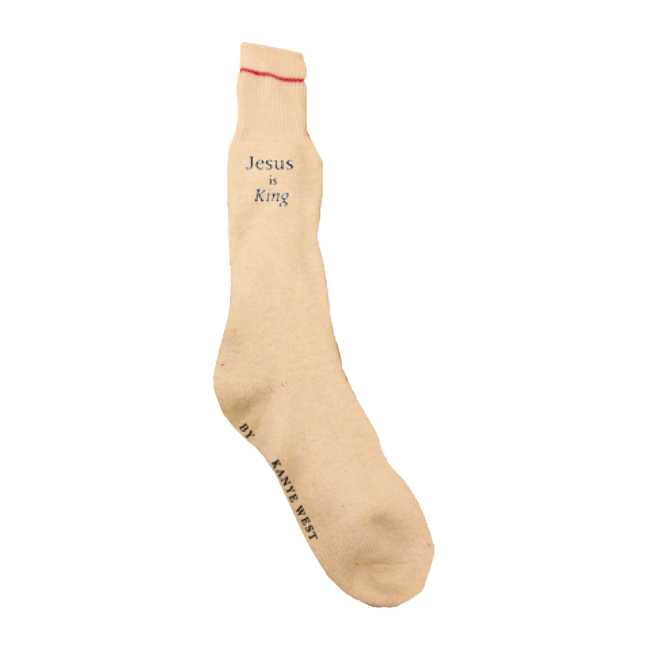