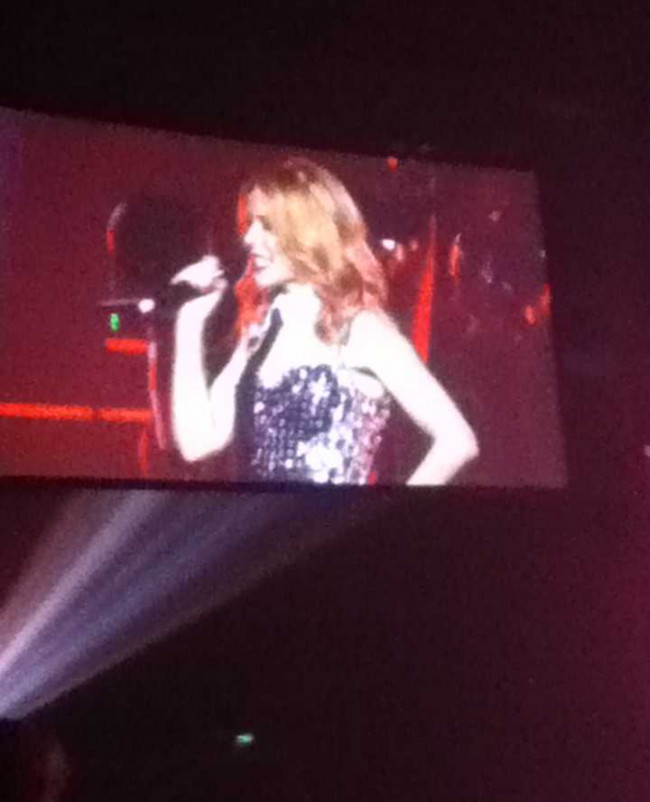 How to review Kylie | a beginner’s guide

This is reprinted from five years ago. I continue to surprise myself, rediscovering my attempted deconstructions of the simplest of art forms.

Isaac (age 9) accompanied me to the Kylie show last night. I thought it might be a good idea to talk him through the stages of reviewing the show. Let’s see, shall we?

We have two main threads here: reviewing the show, and explaining how to review a show

Make yourself a giant cup of coffee.
Isaac: “I don’t like coffee.”
OK then. Fake yourself a giant cup of coffee.
Isaac: “Is that because you saw the wrong typing?”
Yes. Yes. Take inspiration from wherever you can grab it.
Look online for the set list from the show.
Isaac: “What does that mean?”
The set list is the running order of the songs she played. The bigger the show, the more likely it is to be there. Kylie? For sure. This will allow you to fake authority – give the illusion that you’re familiar with all the material, and also allow you to talk about stuff you might have missed if you left early. Like we did. Here’s the set list. I’ll put it at the bottom, so it doesn’t get in the way.

OK. So we need to figure out a way how to a) describe the concert, b) offer up some points of difference so the experience of reading this review feels unique, and c) offer some critical overview (perhaps). Immediate notes to oneself… Isaac, don’t interrupt here!
Isaac: “INTERRUPTION!”
Damn.

a. BIG
Isaac: “Control B automatically does bold, if you highlight it first.”

Isaac: “Loud, bright, and you get very thirsty during it because the venue doesn’t allow you to take water in.”
Sumptuous, nostalgic.
Isaac: “I have no idea what these words mean.”
Sumptuous = splendid, expensive-looking.
Nostalgic = experiencing or exhibiting nostalgia, a sentimental or wistful yearning for the happiness felt in a former place, time, or situation.)
Gleefully tacky (cheesy) and down-to-earth in places.
Isaac: “What’s down-to-earth?
Ah, jeez…

Very Australian, inasmuch as Kylie sounded very Australian and embodies Australia for many. Dancers, many strobe and laser lights.
Isaac: “You could sort of see the laser light beams as they went on to the wall. Like you could see a line going towards the wall, a very straight line.”

Did we say LOUD yet? Upbeat, never downcast. A giant party in a make-believe disco. Kylie referred to the fact we’d all been invited to her backstage area, then to the fact it was Saturday night and we were all at a disco, and then it became MORE.
Isaac: “It wasn’t a make-believe disco. It was a real disco. If it was make-believe it wouldn’t have been real.”
Emphasis on Giorgio Moroder (producer on ‘Right Here Right Now’, and the rather disappointingly cheesy support act – still what can one expect?) and the good times.

Kylie looks sexier the older she gets. Just an observation that has no relation to the music, but every relation to some of the music’s core appeal. One can still aspire to be her, in her over-knee boots and finely toned abs. Sexy, not in a… alright, let’s get back to this.

The show confirmed what I’d always suspected:
Kylie Minogue is a being entirely made of light.
The unbearable lightness of being (Kylie).

b. Points of Difference
She allowed one fan bearing a KISS ME ONCE PLEASE, KYLIE sign up on stage to fulfil his dreams. She performed (impromptu?) cheeky versions of ‘I Feel Love’ and (Natalie Imbruglia’s) ‘Torn’. (Mentioning impromptu cheeky cover versions is a good way of helping the reader feel like they might have been there.) She seemed thoroughly engaged and delighted to be with us.
The final night of a tour (which Brisbane often seems to be) usually brings out the sentimental beast (and beats) in an artist.
Isaac: “Sentimental?”
As of or prompted by feelings of tenderness, sadness, or nostalgia.

Four costume changes that we saw.
Isaac: “One was red. One was black. And one was blue. And I can’t remember anything else. There were too many costumes.”
Several interludes.
Isaac: “Interludes?”
Yeah, when she’s not on stage.

She performed ‘I Should Be So Lucky’ dressed in a blue love heart and little else, from a bath full of feathers.
During ‘Slow’, she stalked her fans in her six-inch platform boots while a dancer balanced on one hand.
The crowd were dressed up but not in a Lady Gaga fans way, more in a night out down the Valley with our forty-something pals way.
Isaac: “There were more than 40 people there.”

Isaac: “Can we go on to point C now?”
No, because we haven’t really said anything here yet.
Isaac: “We haven’t? Oh, OK.”

On our way in, I took a photograph at the entrance to the Brisbane Entertainment Centre compound, and pointed out to Isaac you wouldn’t be likely to see similar signs at similar British arenas.

c) CRITICISM
What did you think of your first arena pop show?
Isaac: “I liked it.”
What did you like about it?
Was it the crowd, the noise, the songs, the singer, the venue…?
Isaac: “I really liked the lights because they were interesting.”
Interesting isn’t a very descriptive word. Can you think of a different word?
Isaac: “Well, it looked complicated.”
Did you like Kylie herself?
Isaac: “Yeah… well, she’s a good singer, and she also made up good songs because there’s no point being a good singer if you make up bad songs.”

Basically, during the first section I was thinking, “Why the HELL didn’t I get myself on the list for Miley and Katy Perry?” but by the time ‘Spinning Around’ delighted I was lost, caught in a trance. Lost in music.

And by the time the ‘Dizzy’ section came round I was ruing Isaac being with me cos I WANTED TO SEE THE REST OF THE SHOW. But he’s nine, and it was 10.30pm by then, with a 45-minute drive back – and so we missed the ‘Lick’ section and the ‘Aussie’ section and doubtless a tumultuous and tear-streaked encore.

Encore
Into the Blue