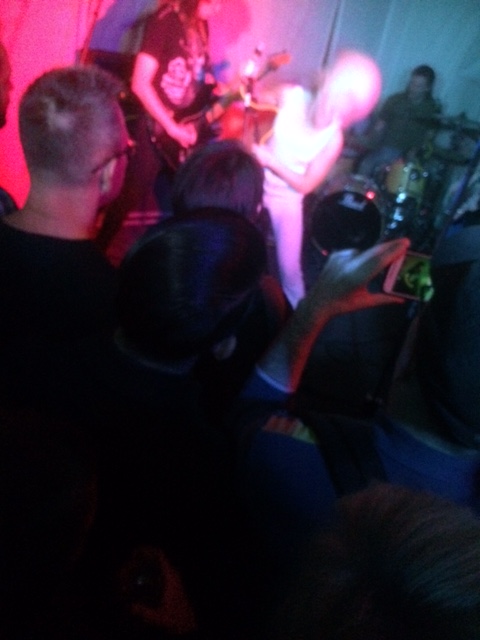 Clash magazine has it that Melbourne band Amyl and the Sniffers are “a bunch of deviant children enjoying illicit behaviour and the odd pineapple juice”. Beat My Bones says, “Their songs are as fast as the Ramones with the obnoxious smuttiness that the Sex Pistols had”. It is not in my nature to quote other writers when it comes to hyperbole but OK. Wow.

This clip partly captures it…

What this clip fails to do is capture the hi-octane movement of Amyl herself, shaking herself into a frenzied ball of excitement and inspiration, passed across the heads of the audience as she attempts to pull the lighting rig down from the ceiling, super-cool yet super-intimidating (precisely cos she is so super-cool), the humour, the laconic asides, the bare chests of the lads gleaming with perspiration and the righteous heritage of Coloured Balls, GOD and AC/DC, the short punchy songs about lust and shopping centres and boozing and revenge, the harsh metallic clash of second generation punk – we’re talking ’78 here – songs that are equally rooted in 1970s Aussie boogie and 1970s UK Oi!…

The guitar dude reminds me of Fast Eddie.

What this clips fails to do is capture the infallible exhilarating sense we have (I’m speaking for others here, but surely everyone must feel this) that we are bearing witness to a Rock Star. For Amyl is without a shadow of a doubt, a fucken Rock Star.

Shameless, and direct, like all great Rock Stars should be.

“There’s no way they haven’t heard Cosmic Psychos,” the 50 per cent Australian part of me (check my passport) yells to my neighbour.

I’d shower you with song titles and raucous commentary – ‘Cup Of Destiny’, ‘Westgate’, ‘Balaclava Lover Boogie’, ‘Stole My Push Bike’, the one where Amyl just lets rip with a long list of expletives – but I’m gasping too hard to take notes.

I can see why Amyl and the Sniffers have signed to Rough Trade, why folk in the UK are going ape-shit though in fairness tonight is pretty much exactly what my last five years of gig-going in Brisbane was like. Except the figurehead. Except Amyl. Saw plenty of cool shit but never saw anyone like Amyl the whole time  I was out there.

Truth is: Aussies know how to rock.

Great fucken music to listen to on the train.

Everyone in the Sniffers has mullets. Of course everyone has mullets. Haven’t you seen The Chats? This next clip captures another side, street talking.

It took me 20 minutes to conceptualise and write this blog entry, approximately the same length of time it took these Aussie punks to write, record and release their debut EP Giddy Up.

‘Some Mutts (Can’t Be Muzzled)’

Here is a video from last night, but I am not convinced this manages to capture the feeling either.