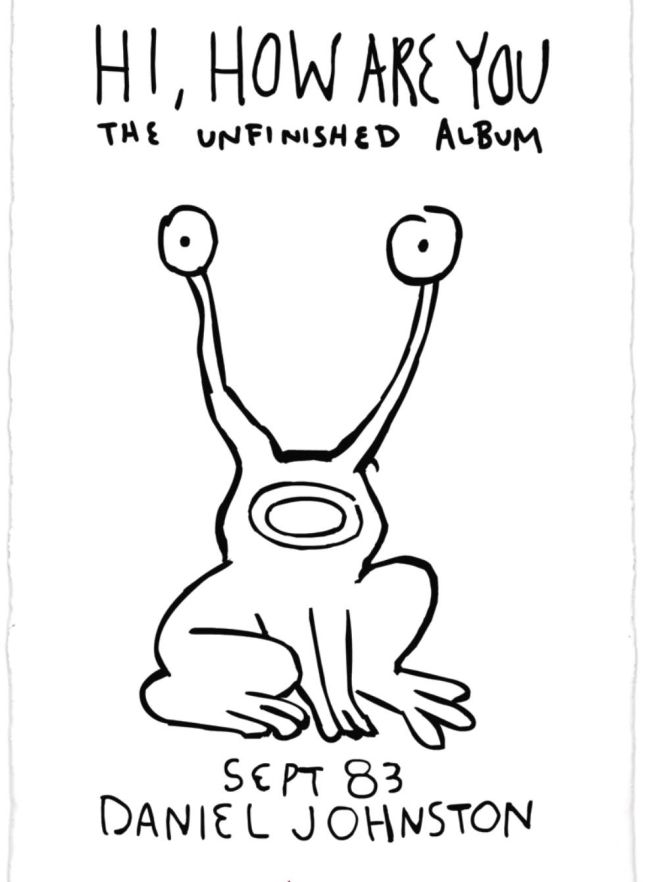 Reprinted from Collapse Board. This was supposed to be the introduction to my Daniel Johnston book (unpublished).

The conversation between Loene, Millie and myself went something like this.
“Looks like it’s going to rain. Let’s go inside.”
“Might not rain.”
“Let’s stay in the courtyard. There’s more room here – and look, here are some beers.”
“It’s going to rain. Let’s go inside.”
“Have you seen the line of kids outside? It’s crazy. Let’s stay outside.”
“There’ll be more atmosphere inside. Also, Daniel’s supposed to be playing an art gallery, not a courtyard.”

So it was the three of us stood, hemmed along one side of Sydney’s Monster Children gallery, sweat dripping from every conceivable pore, no microphone except a clip-on one, Millie blowing sweet gales of sound down her saxophone, Loene wrestling tempests from the guitar, as people asked others asked others, “Is this Daniel Johnston? He looks pretty different in real life.” Meanwhile, close on 500 kids queued patiently outside to get a glimpse of some fellow who might possibly be an Englishman, might not, who cares, it’s free and it’s a happening scene.

Shortly after we finished, the gallery owner announced that as there was no room inside Daniel would be performing on the street and please could everyone keep the beers out of sight and not block the road … so Daniel and his guitarist Brett Hartenbach stepped up to the plate, steps slippery, Daniel being passed his lyric book by his brother Dick Johnston, maybe taken aback by the strangeness of the scene, maybe not, who knows with Daniel? Two songs in, and he’d reduced the audience to tears. Two songs in – ‘Life In Vain’ and ‘Silly Love’ – and then he was gone, sloped off around the corner to smoke a cigarette.

Sometimes, all you need is a massive heart and naked vulnerability.

“He can do that, you know,” remarked his brother afterwards. “Make the magic happen.”

Brisbane (Laneway Festival)
Around me stand members of Australia’s alternative rock aristocracy, watching this man called Daniel Johnston perform: the voice of a child wavering and plaintive, shaking uncontrollably. His voice is so at odds with the reality of his 49-year-old physical presence, it’s surreal. People so want to believe in Daniel Johnston – the idea that anyone can achieve their dream if they stick with it, the illusion of infatuation masquerading as love, the innocence and pain and inability to relate to the adult world …

After an exquisite handful of opening numbers performed solo, or just by himself and Brett, the set is full-on blues rock: Sydney band Old Man River supply the necessary licks and postures, as Dan sings aloud from his omnipresent lyric book – a handful of John Lennon covers, ‘Fake Records Of Rock’N’Roll’ from new album Is And Always Was. He does this everywhere he tours – someone somewhere decides on a bunch of musicians to play on his songs: he shows up, no rehearsals. They perform. At least Old Man River have paid him the courtesy of learning his songs. Many haven’t. Songs from the cult 2006 documentary The Devil And Daniel Johnston are performed. He attempts a couple of jokes. He picks up his lyric book and shuffles off without a backwards glance. Daniel Johnston doesn’t hang around.

Earlier, I’d driven the four of us – me, Dan, Dick and Brett – round the winding, leafy streets of Brisbane. Several times, Dan threw back his head and laughed. “I’m having such a fun time today,” he’d exclaim, knowing that a visit to a comic book store, his one constant in an ever-changing world of tour schedules, is soon forthcoming. He laughs. “This is fun, isn’t it Dick?” His colleagues are more enthused by the fact we’ve just visited Walkabout Creek wildlife centre – home to a real live duck-billed platypus – then picking up more comics, but they go along with the joke.

A week later, on the way to Japan, the travelling troupe is fined nearly $1,400 by Jetstar for the extra weight incurred by Daniel’s comics.

Melbourne (Speakeasy Cinema + Prince Of Wales)
“I don’t want to hear it.”
Sorry … ?
Daniel starts walking determinedly, and quickly, down the street.

I shrug, and walk back to where his brother is standing. All I’d tried to do was tell Daniel how I’d tried to show the dragons in Chinatown to my four-year-old son last time I’d visited Melbourne. “Guess you better take this back, Dick,” I say, giving him the $100 note that he’d passed to me. (He’d slipped it to me, under the pretence of me taking Daniel to dinner.)

“Sorry about that, Everett. That’s just how he gets sometimes.”

It had started so well. When I’d arrived at Daniel Johnston’s hotel room the day before, he’d greeted me effusively, like a long-lost buddy, grabbing my hand, talking fast and enthusiastically the way he does: “Hey Everett! Come on in, buddy. I’ve got a load of new comics here! Want to go get something to eat? We could do an interview. You wanna get something to eat? Let’s go!”

So we sat outside the hotel, outside a sushi bar, Daniel scattering most of his food on the pavement for the sparrows, laughing in delight when they took the food. He smoked a few cigarettes, we talked some: about his early recordings which he only ever put on to tape as a way of a thank-you to the handful of art college friends who’d made him feel so special; about his days as a travelling carnie in the mid-80s (where he wound up living in Texas, minus his necessary medication); of the bidding war between Atlantic and Elektra Records that took place while he was institutionalised, that only happened as a result of Nirvana singer Kurt Cobain wearing his Jeremiah The Frog T-shirt; even of a weird incident in the early 00s when a Japanese girl decided she was going to marry him and moved out to Waller, Texas …

We walked back to the hotel, Daniel bubbling and excited.

“Hey, you want to talk some more? We could talk some more! Let’s sit down on the couch right here!” Sure, but shouldn’t we find Dick? Maybe we should go upstairs and find him?

It made it awkward at the Speakeasy that night. I was supposed to be conducting a live Q/A session with him between the two screenings, and performing another spoken word set. So Dick and the PR colluded to move Daniel outside while I was on stage with Brett – Dick had figured Dan didn’t like the attention being paid to me, and furthermore hadn’t liked the question about his Japanese suitor.

So Brett played some of Daniel’s songs on the guitar while I recounted the tale of my first encounter with Daniel Johnston in front of a large, scarily reverential audience: through my initial shocked, cynical laughter at hearing Hi, How Are You? through my almost immediate conversion – partly because of shared experience: the same inability to cope with girls, the same way we’d used the Beatles songbook The Compleat Beatles to learn and pound the piano, the same love for the same comic books (Jack Kirby, Marvel Comics) – through a strange visit from his ex-manager Jeff Tartakov to my house in Brighton in 1991 when he’d instructed us to hide all the knives and had passed along to me a Daniel Johnston T-shirt with a picture of Jeremiah The Frog on its front…

All this was punctuated by Brett’s beautiful guitar (including ‘The Story Of An Artist’ – a song Daniel never plays on stage anymore), and building up to the incident where I’m having a three-way argument with Kurt Cobain (referred to as “my mother” in the piece)and his wife in LA in 1992: us, mocking his taste in T-shirts and pointing out that folk take notice of what he wears on his chest, him whining that he doesn’t own any T-shirts by bands he likes (aside from the homemade Flipper one, presumably) and me saying, “Look, I have this Daniel Johnston T-shirt, but you have to promise me that you’ll wear it cos it’s my favourite shirt, and really special to me…”

“Yeah yeah , Everett. Of course I will.”

And because Kurt never liked the idea of taking anything for free, he swapped it for a Pearl Jam shirt that featured insults hurled the band’s way by music critics (both he and I despised Pearl Jam). So I wore that, and he wore the Daniel Johnston T, and the rest … well, the rest is right up here on stage next to me, almost physically pushing me aside, now he knows that it’s his turn.

“Thank you, Everett, for that introduction,” he barks.

And once again, the three songs performed – including a truly tear-jerking ‘True Love Will Find You In The End’ – Daniel performs with Brett are magical. The crowd is spellbound, rapt.

“Don’t worry too much about it, Everett,” Brett says the following day. “He sometimes gets like that. He was like that towards me for a whole tour once. And then the next time he saw me, he gave me a massive bear hug.”

Welcome to the world of Daniel Johnston.